Archaeological research on Siesegemkouter in Aalst

The results of the trial trench research carried out by ADEDE in 2019 on the Siesegemkouter quickly show that there are interesting archaeological traces in the soil here. During the subsequent archaeological excavation, ADEDE archaeologists find plenty of evidence that the area must have been inhabited by humans during the Metal Ages and the Roman period.

Most striking for the Metal Ages is the discovery of two circular ditches. The smallest ditch has a roughly estimated diameter of 21m, the largest ditch has a diameter of 40m. In all likelihood, these are burial mounds where the above-ground part disappeared from the landscape over time. No traces of a wall body or pile crown were found. The original burial chamber was also not found and has probably been lost over the years. Traces of secondary burial burials were also not found. Pending the results of the scientific research, on the basis of similar finds of burial mounds in the wider region, these circular trenches can be carefully placed in the period from the Final Neolithic to the Middle Bronze Age. An unwritten rule with this type of burial mounds also seems to be; the larger the diameter of the trench, the older.

Another great find was a well-preserved Roman fire-remains tomb. In the tomb, the ADEDE archaeologists found a nearly intact dark pottery pot or urn. The pot was completely lifted from the bottom and will be subjected to various forms of scientific research before being prepared for conservation. One of these will be an X-ray analysis of the contents to determine whether it is an urn containing the deceased's bone material or an ordinary grave gift. In addition to the intact jar, a considerable amount of pottery shards was collected from the filling of the tomb. An initial analysis of the recovered pottery shows that the shard material comes from at least four different types of pottery. These include a bowl or dish of undecorated terra sigillata and two fine-walled terra nigra jars with light brown to light gray shades. The terra sigillata was identified as Dragendorff 18 or 31, to be dated mid-second century AD. and comes from the central French pottery workshops. The jars were identified as terra nigra types 26 and / or 27 and date back to somewhere in the middle of the second century AD. to place. In addition, there are also a whole series of similar thick-walled rough red shards that are particularly noticeable by the complete absence of diagnostic elements (no edge fragment, foot / bottom fragment, ...) despite the considerable amount of fragment material, the only characteristic being a raised band decoration that appears on some of the the larger ones of the shards keeps coming back. It would be a jug type that can be dated between AD 50. and 300 AD. In addition to the pottery, nails were also found in the grave, which indicates that the cremation took place on a wooden lounger where the remains of the deceased's fire were deposited in the grave after the cremation. 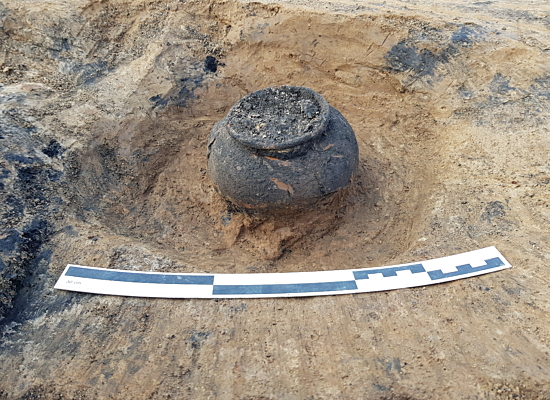 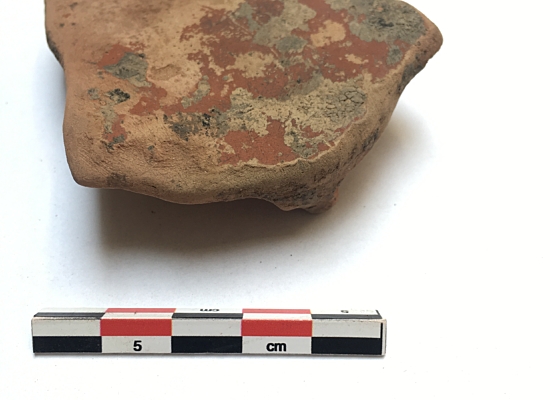 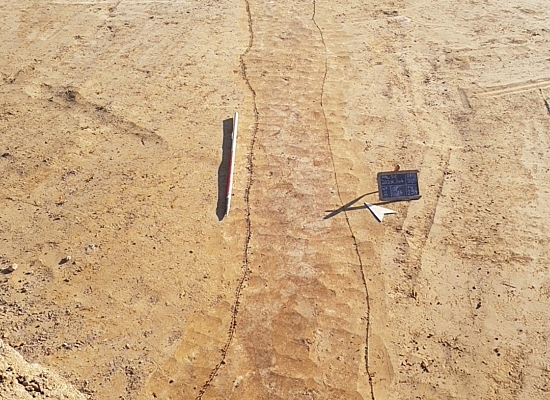 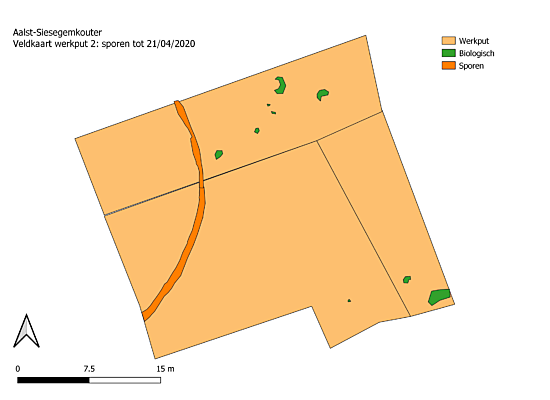